My Week in Warcraft: Leveling with my daughters, Pathfinder, and playing through Legion again

- August 09, 2019
The highlight of my week in Warcraft has been starting new characters with my teenage daughters and leveling them together on Zangarmarsh, which is the realm I'm playing on more now because I've finally found a guild I like there (Team Murloc <3 ). So they wanted characters on Zangarmarsh too because eventually (when I lift parental controls a bit) they probably want to join the guild as well.
So we started our characters. I started a night elf druid, my oldest started a gnome rogue, and her sister started a draenei shaman. After a couple hours of playing, they're sitting at level 10. We're planning to get back to leveling them a bit more on Saturday. We leveled them Tuesday and Wednesday nights for about an hour each night, after their younger brother and sister went to bed. It was a fun way for all three of us to relax and spend some time together at the end of the day. 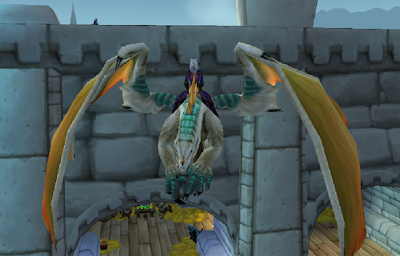 I started my first character on Zangarmarsh for Team Murloc a few months ago, but I hadn't played her a ton and even when I do, I'm a very slow leveler. But she hit level 60 yesterday and she can FLY. So leveling will go much faster now which is great. I was happy. And Outland is still one of my favorite areas to level through so I'm looking forward  to this next stage of leveling.


Okay. So about a week ago I said that one of my Warcraft goals for this month was to work on the various Pathfinders so I can get flying in WoD, Legion, and BfA. And I spent a couple days working toward that for BfA and.... screw that.
It was starting to feel like another job to me, and instead of having fun playing or relaxing playing I was making lists and checking things off and strategizing and just putting WAY to much effort into something that, for me, is about relaxation. This is not saying anything against those of you who are very goal-oriented playing WoW -- like I've said before, we all play it differently. And as excited as I was to get flying for my level 60 mage, the amount of work I have to put into getting flying for later expansions just is NOT worth it to me. And now that I realize that about myself (again, because I used to know it but then thought maybe I was mistaken. But I was definitely right to begin with...) I can just go back to randomly starting alts and focusing on gearing up my 2 characters I consider to be my mains (because I can't choose between them...)


Our Friday night family WoW group has started Legion and we finished Stormheim and Aszuna, and we're going to be leveling through Valsharah this week. It should be fun, and all my one daughter wants is for us to get to Argus, because that's her favorite area in the entire game. So we're working toward that and I'm looking forward to revisiting Argus. It's been a while.

Popular posts from this blog

Warcraft: solo, and as a family 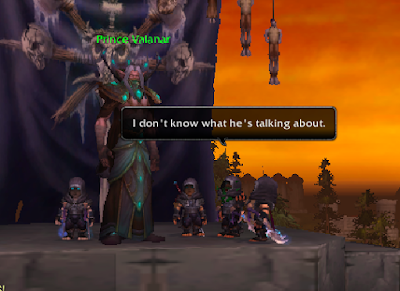 Most of the time when I'm playing WoW, I sort of use it as a way to zone out and relax. I'll quest, or pet battle, or gather herbs, or fish. I'm not a very driven, motivated WoW player. I definitely tend to take things at my own pace, and I don't feel the least bit of guilt or FOMO if I decide I don't really feel like spending time on something.
As I mentioned in an earlier post, I haven't been able to fly since Mists of Pandaria. Precisely because the grind to get flying isn't worth it to me. I don't need another job; I work enough hours as it is!
So my solo Warcraft time is a way for me to just zone out at the end of the day, or to relax during breaks from work during the day. Complete a quest or two, log out, done.

My husband and I used to play together more, leveling, and I don't doubt that we will again someday when we both have more time and life isn't so hectic. A few years back, we started a family Warcraft night in which me, my husband,…
Read more

July got away from me in a flurry of writing deadlines, and then my sweet asshole of a cat knocked my laptop (which is what I play Warcraft on, since my desktop is really slow) off of my desk, cracking the screen. So I can still play WoW on it, but it's hooked up to an external monitor, sitting on my desk which makes it... not a laptop anymore. And I usually played WoW while sitting on the couch in the evenings, watching TV with my kids.
So that has kind of sucked. On the upside, I've read more since the laptop has become less laptop-ish, and I'm feeling excited about other hobbies again as well. So, silver lining, I suppose?
Limited WoW time doesn't mean I can't still set some goals, and probably it's better that I do so I'm not wasting my limited gaming time! And I have some goals for my other hobbies and reading as well.

Warcraft Goals 1. Start working on the various Pathfinder achievements. I haven't been able to fly since Mists of Pandaria because…
Read more 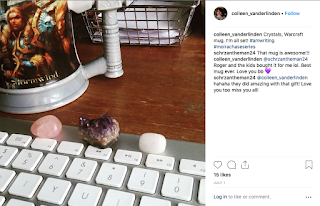 This week's Blaugust theme is "brainstorming topics," and I will definitely have some posts up this week about brainstorming because, for me, it's such a vital part of the writing and editing process. But today I want to share my own little weird writing rituals, inspired by this post from Magimos' blog.
As I've mentioned before, I write and edit for a living, and I'm currently preparing to start mentoring a beginning writer in a group I'm in. I write anywhere from 3,000 to 5,000 words most days, but I've had to develop some tricks to get myself going. It's so easy to end up scrolling through Twitter or Facebook, or reading just a couple more posts from stuff I've subscribed to in Feedly. But the work needs to get done.
Writing is a mental game, and in the end, all that matters is finding which cues and rituals work for you. I spend my mornings editing, blogging, and reading blogs, have lunch, get dressed, go outside and water the garden, …
Read more

WordWitch
I'm an author, editor, blogger, reader, gamer, crafter, gardener, cat herder, mom, and wife. I write urban fantasy and romance as Colleen Vanderlinden, Ella Linden, and Elle Harper. This is where I write about randomness. Thanks for stopping by!